Perhaps unsurprisingly for a review for CNN, the video seems like the “real” review, and the written article seems like an afterthought extracted from the video review. He makes three main points:

I feel like #3 is by far the most interesting point, but Valdes-Dapena seems ill-equipped to make it. He just says it’s very annoying, rather than explaining or illustrating why it’s annoying. Perhaps because he’s used to writing about cars, not about user interfaces?

I’ve long been frustrated by the fact that car reviews seldom devote attention or expertise to the design of the controls of the car. They matter a lot to me (shocker, I know), but I think they matter a lot to everyone, whether they think about control design consciously or not. The Model 3’s touchscreen centric design is so radical, it deserves a thorough review of its own.

My nephew Anders texted me an animated dog — an Animoji, from the same family as the alien you see above — that said, in the 19-year-old’s voice and with his facial tilt: “Hey, Uncle Mike, it’s me!”

I knew Anders had figured out to set up the iPhone X (“10”) that Apple loaned me ahead of its release in stores this Friday. Preorders for the $999 “future of the smartphone” began last Friday in 55+ countries. (The Animoji choices include unicorn, pig and panda.)

Anders, a college freshman, is our family’s designated early adopter (he followed 4G blogs long before the fast broadband rolled out nationally), and a longtime Apple connoisseur. 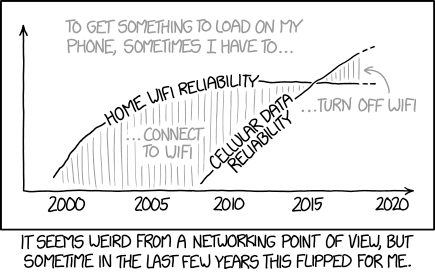 endlessmike
reply
This is definitely not the case in my house. My internet connection is very stable and I have a good enough router that I don't have issues. Meanwhile my cellular data connection is much slower due to it being a popular provider here.

CaffieneKitty
reply
Unless you live in an apartment building from the 70's, which due to an excess of stucco and rebar are nigh-perfect Faraday cages. (I don't mind not having a cell signal in my apartment so much, but when I get delivery I have to walk with them out to the freaking parking lot to get their 'debit at the door' machine to work. :-P)

emdot
reply
Same, but at work not at home. (Ironic: since we're on a network backbone.)
San Luis Obispo, CA

Belfong
Same to me. My work internet sucks. Probably because they throttle.

zippy72
reply
Weirdly this was already true in the UK for 3G and then reversed for 4G. Now I'm in Portugal it's pretty much evens.
FourSquare, qv

reply
This was often true when I was on Verizon. Now that I'm on AT&T though... It's almost never the case.
Colorado Plateau

fxer
reply
ouch, too close to home. I'm going to wear out the wifi toggle button in the iOS quick panel.
Bend, Oregon

freeAgent
I currently use a Linksys EA9500 and my home wifi is rock solid and never goes down or has any trouble whatsoever. Router/AP selection makes a huge difference.

duerig
I have excellent wifi as well. But the problem seems to be that no matter how good your wifi is, there is a region around your house where your phone tries to connect to wifi even when it isn't available. Getting better wifi just changes the shape and size of this border region. Maybe cell phones err on the side of trying wifi when it *might* work because of cell phone data charges.

freeAgent
That's one advantage to living in LA. Houses are so expensive that you probably can't afford one with enough square footage to make signal strength from a powerful router/AP an issue :P

duerig
Hahaha. I never have wifi problems inside my house. But if I am ever using my phone as I walk away, I always go through a deadzone. Surprisingly, my SSID seems to be visible for half a block away, much further than the actual wifi can reasonably be used.

dreadhead
This used to be the case for me until I switched over to some Ubiquiti equipment.

Frankenab
We got in on eero's in the kickstarter phase, and love them. We couldn't stream Netflix before.

satadru
reply
For me it is connections to wifi outside the house which turn out to be shitty, but yes.
New York, NY

Between 2.4GHz congestion and various other congestion handling features, getting a high-quality AP makes a huge difference but most people won't replace them until they break.
Washington, DC

Pretty much it, except that cellular data still have a cap, which really sucks.
Berlin

Ironica
Technically we have a cap too (well, it throttles after we reach it, rather than cutting off or charging more) but no one in our family has been able to use more than 60% of it in a month. And unused data rolls over, to a cap of 2x the monthly allotment. So I would have to use more than 30 GB in one month to get throttled, and I don't see that happening anytime soon, even though I almost never turn on wifi. (And I almost never turn on wifi because... see above comic!)

According to the cable company reps who keep calling me, it's because I haven't upgraded to the XTREME GIGABAND PANAMAX FLAVOR-BLASTED PRO PACKAGE WITH HBO, which is only $5 more per month for the first 6 months and five billion dollars per month after that.

olliejones
It's actually called "bufferbloat." It's a real thing. It's due to too much RAM (yeah, too much RAM) in your router.

Conversely, Apple’s silicon team also doesn’t have to carry the baggage of competing vendors and devices. For example, Apple A10 doesn’t have to support Microsoft’s Direct X. It only and exactly has to support Apple’s specific technologies and implementations.

In other words, what iOS wants fast, the A-team can deliver fast.

I’ve said it before and will say it again: I’d prefer the iPhone over Android even if it were Android that had the massive lead in CPU performance. But Apple is literally over a year ahead of the competition — even the iPhone 6S and SE outperform the S8 in single-threaded performance.

endlessmike
reply
The sadder part is that despite the S8 having the fastest processor of any Android device, Samsung's code is so horrible that it runs visibly slower than the Pixel, which uses an older, slower SoC. 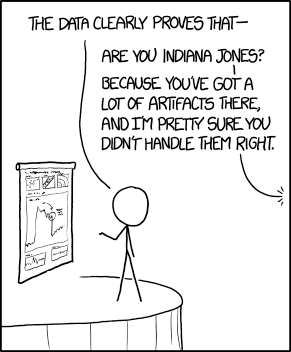 Vilhelm
Randall didn't. The intentionally-incompetent character he created did.

alt_text_bot
reply
I didn't even realize you could HAVE a data set made up entirely of outliers.

Saturday Morning Breakfast Cereal - The Superhero We Need by tech@thehiveworks.com
Monday October 17th, 2016 at 9:44 AM Hovertext:
Later, it turns out Patient-Man and Existential-Crisis-Man are the same person. Red Button mashing provided by SMBC RSS Plus. If you consume this comic through RSS, you may want to support Zach's Patreon for like a $1 or something at least especially since this is scraping the site deeper than provided.
Read the whole story

Gary Johnson after he loses the election!